I welcome you to join The Mary Mac Show Community where listeners to my podcast come together to be comforted, encouraged and learn about the grieving process.

Grief Specialist, Award-Winning Author, Speaker, Executive Coach, who established the Foundation for Grieving Children, Inc., Mary M. McCambridge (Mary Mac) shares her over 35 years' experience with those who are grieving the death of a loved one.

Before completing college, Mary Mac had experienced the death of four friends – two teenagers to drunk drivers and two college students to inoperable cancer. Later she would sustain many other deaths of family members and close friends including the murder of her former husband’s 11 year-old daughter, which took them on an 18 year journey to help solve the crime. It was these life experiences that led her to become involved in the field of bereavement.

Mary is host of The Mary Mac Show, where she lends her experience to comfort, soothe and educate those grieving the death of a loved one.

The Mary Mac Show is currently heard in 60 countries around the world, is considered among the top 10 best podcasts on grief and bereavement and ranks in the top 10% of podcasts worldwide.

She trained Assistant District Attorneys and Homicide Detectives on how to better communicate with crime victims and served as their liaison with families of homicide victims, often joining them at murder trials. She served as Founding Treasurer for the political action committee, Justice for All, and helped shape numerous pieces of legislation in New York to favor crime victims.

She has served as consultant to media surrounding homicide cases.

She uses her expertise to assist the bereaved through her MaryMac.info website where her bereavement articles, blog and information help hurting people better understand their journey.

While there are many organizations whose mission is to help dying children, such as hospice, Ronald McDonald House and St. Jude, Mary birthed the Foundation for Grieving Children as a response to the very real need to assist children regardless of how their family members had died. The seed for the foundation was planted in her spirit in the late 1980s when she could find limited assistance for siblings and children of those who had been murdered.

The Foundation for Grieving Children, Inc. is the first national non-profit public charity whose mission is to raise funds and provide grants to community-based organizations which assist, educate, counsel and comfort grieving children, teens, young adults and their families after the death of a loved one through any circumstances.

She received her Bachelor of Science degree from the University of Scranton and an MBA in Finance/International Business from Fordham University.

She has written articles and blogs for numerous sites on the web and print magazines. She has also appeared on radio and television shows including CBS’s Up to the Minute, News 12 Long Island, Ask the Doctor (NYU Medical Center Radio), To Your Good Health Radio, The Michael Dresser Show and many others.

She has presented workshops at numerous Parents of Murdered Children national conferences, the World Gathering of Bereavement, and grieving children conferences.

She also served as press spokesperson for POMC conferences where she would write and distribute press releases and was interviewed by local news, radio and print media.

In 2009, she received the “Healing Hands” award from A Caring Hand, New York City’s only center for grieving children, for her tireless efforts in helping grieving children, and the University of Scranton’s “Frank O’Hara” award, the highest recognition given to distinguished alumni. 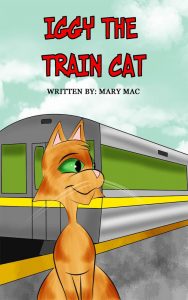 In 2013 her dream of creating a children’s book became reality with the publishing of Iggy The Train Cat, a story she wrote a decade earlier. With the help of a wonderful illustrator, Iggy was born. Partial proceeds from this and all her books helps support the Foundation for Grieving Children.

In early 2021, she launched The Mary Mac Store offering creative products for the bereaved either for themselves or as gifts to others. Partial proceeds of all sales help fund The Foundation For Grieving Children, Inc.

It is her passion to address the unmet needs of grieving children, teens and young adults which birthed the creation of the foundation and to help bereaved adults better understand their grieving process, heal and revitalize their lives after a loved one’s death through her podcast, books, store, products and services.